Back in 2013, the Art Lives Here initiative sent out a request for proposals propelled by an “Our Town” grant from the National Endowment for the Arts. The request asked artists and community members to envision creative solutions for re-invigorating underutilized spaces while connecting to a variety of community subsets. Proposals flooded in and many were funded, one in particular was an incredible success.

The Southside Music Series is the brainchild of Marc Blackwood. Blackwood, a professional musician and Brentwood resident, was interested in the Mt. Rainier Skate Park across the street from Red Dirt Studio on Otis Street. He built his first music series in the park in 2013 with the support of an Art Lives Here grant, and proposed the series’ expansion in 2014 to include a skateboarding competition.

In 2013, Blackwood simply wanted to bring the community together to enjoy live music and skating, grilling food, mingling, and eating together. He suggested a collaborative call-and-response type energy might emerge between musicians and skaters. With the organizational help of artists J.J. McCracken and Margaret Boozer/Red Dirt Studio, the event was an incredible success. People walked, skated, or rode bikes to the park where Blackwood’s musical project InnerLoop performed. Red Dirt Studio hosted a grilling area in front of the warehouses and people gathered to cook and share their lunches. Young skaters later reported the success of that collaborative energy Blackwood was interested in. 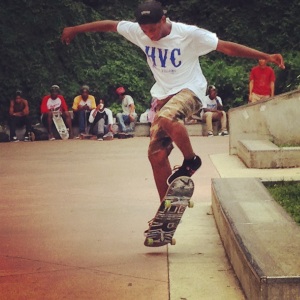 With increased funding for creative placemaking efforts in the Gateway Arts District (GAD) in 2014 from ArtPlace America, Art Lives Here partners were thrilled to receive a second proposal from Marc Blackwood for an expansion of the original Southside events: The Southside Music & Skateboarding Series. Blackwood proposed three events, but this time interactive community service components were added. He sought to provide greater structure to engage young residents otherwise mostly absent from Gateway Arts District programming, in the form of workshops and competitions. These components focused on skill-building and creative expression in skateboarding, and then on rewarding related achievements.

The first event in the new series aired in June of this year and featured live demonstrations by The DC Wheels skateboarding crew, a live performance by the band Lee Blackwood & Graham, and a DJ set by InnerLoop. Kids skated with pros, many of whom were well-known and highly respected by kids with skateboarding experience in the region. The second event centered around live music and a free skateboard deck-painting workshop, and also included MNC-PPC’s Parks and Recreation-produced skate competition. The final event in the series was perhaps the most exciting—live music, dynamic DJ sets by InnerLoop and Subdistrick’s Julez, and a free skateboarding competition with four award categories. Several pro skaters from The DC Wheels served as judges for the August competition and issued cash prizes to winners in each category.

Phil Davis, Acting Director of the Brentwood Arts Exchange, states “what made the events successful is that all kinds of people came out—young, old, families, you name it—all hanging out together in one place to enjoy music and skateboarding.”

“These have always been good kids, filled with a sense of their own potential, looking for company in that. That’s what Red Dirt did, meet them there. That’s what the town did, too. Mayor Miles and the council, specifically Jimmy Tarlau were behind them all the way.” – Margaret Boozer

The story of the Southside Music & Skateboarding Series is particularly compelling because of the history of the Mt. Rainier Skate Park’s inception. During the last event, mid-way though the skateboarding competition, the emcee paused to ask all competitors to take a moment to raise their decks to artist Margaret Boozer. Two young men ran up to present her with a deck that had been signed by all the skaters, who ranged in age from 10 to mid-twenties. All enthusiastically saluted Boozer, showing their sincere thanks and deep respect for her role in the creation of the Mt. Rainier Skate Park. It was a touching moment that resonated in the skaters, in Boozer, and in the audience.

Organizer J.J. McCracken says, “The Southside Series is about homage. It’s about knitting together disparate parts of our community: musicians gaining traction as a creative force here in our (wonderfully) visual arts and movement-focused arts district; youth putting energy into something constructive, honing craft, and using it for expression; artists who make a home in this community reaching out to neighbors in other disciplines to build things that foster development in all creative fields. It’s about partnership—it’s being creative while also yielding to others’ creativity, it’s collaboration. The Mt. Rainier Skate Park was built via just this sort of collaboration, between local children with an idea (building a skate park) and artist Margaret Boozer, who helped them understand how to transform that into something actual. We wanted this series to honor the history of this collaborative place-making. To our great surprise, these young men had the same idea, honoring Margaret in such a deep, meaningful way.”

Around 100 people attended each of the first two Southside events, and the audience grew to over 150 the day of the final competition. Making an annual event of the Southside Music & Skateboarding Series would be a local asset, using the momentum of partnerships to broaden our community’s inclusiveness in a thriving public park space. 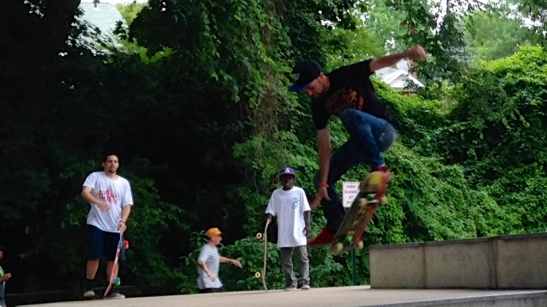 J.J. McCracken says of the series, “Mt. Rainier Skate Park is a positive, progressive place where each day I see kids and young adults working hard to hone their craft, and respecting each others’ efforts toward that end. This is what the new Southside Series set out to celebrate, and to honor by rewarding discipline with generous cash prizes (which simply offer a way of showing deeply considered recognition). It also allowed us to help Art Lives Here and the Brentwood Arts Exchange trickle funding down into the community to its real roots—encouraging local youth to create, and then recognizing quality in the resulting compositions.”

The Southside Music & Skateboarding Series is funded by the Maryland-National Capital Park & Planning Commission, administered by The Brentwood Arts Exchange in partnership with Art Lives Here/Joe’s Movement Emporium. Additional support is provided by the Gateway Arts District and the Maryland State Arts Council.

Special thanks to our host Margaret Boozer-Strother/Red Dirt Studio in Mt. Rainier, Maryland, and to Dave Cahill/Mt. Rainier Bike Co-op for event assistance. Thanks also to Phil Davis, Neena Narayanan and Brooke Kidd.

Joe’s Movement Emporium is a cultural arts hub that acts as a catalyst for creativity and economic opportunity for all through productions and programs in education, artist services and work readiness. Located in the town center of Mount Rainier, Maryland within the Prince George’s County Gateway Arts District, the organization supports and promotes creative projects of local artists and community groups. For additional information on programs and events, please visit www.joesmovement.org
View all posts by neenajoe →